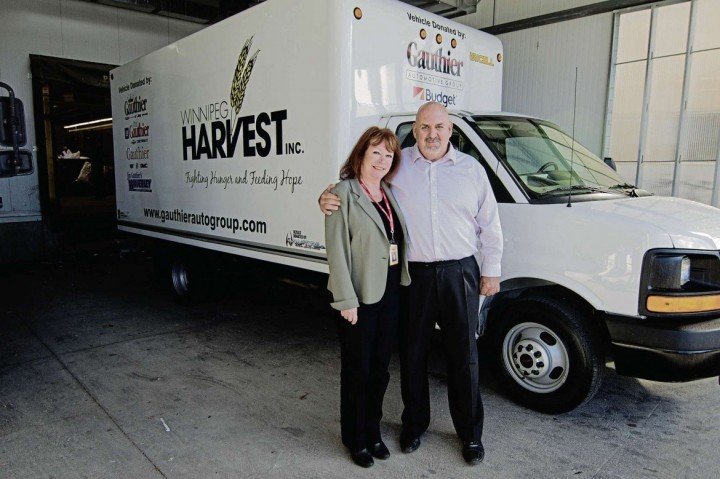 On behalf of the Gauthier Auto Group, we are happy to announce the donation of this new truck to Winnipeg Harvest.

Nutritious food is going to get where it’s needed on a new set of wheels.

On Oct. 21, Winnipeg Harvest received a new 2014 delivery vehicle from Gauthier Automotive Group that will replace an aging 2001 truck.

"Let’s hope we get another 15 years out of this one," Randy Gauthier of the Gauthier Automotive Group said.

According to Winnipeg Harvest managing director Kate Brenner, new trucks cost less in maintenance and are essential to delivering donated food to organizations and groups in need, such as daycares, senior residences and schools.

"It’s absolutely something that we need," Brenner said. "These trucks are the ones going out and delivering every single day, making two or three runs a day, six days a week."

Brenner said the donation makes a huge difference for Harvest because it means they can spend the money that would have gone towards a vehicle on other programming and the core mandate, which is to get food out to people throughout the city.

"This is hugely impactful for us," Brenner said. "For any of us to go out and try to raise the money to buy a vehicle like this, obviously we need it, we have to have it, so this is a tremendous gift that we’re getting from these folks and it’s very, very generous of them."

Gauthier decided to make the donation after a tour of the Harvest facility.

"We wanted to do this because of all the work they do, all the work that they’ve done," Gauthier said. "I think this is the very least we can do. There’s so much that goes on and so much good that Harvest does. We want to help out the community and this is a fantastic cause."

According to Brenner, the truck is ideal for Harvest deliveries because it’s compact and easy for the volunteer drivers to manoeuvre. Because it can fit into small spaces, the truck can easily get into back lanes behind buildings. The older truck isn’t going to waste either — since it’s still functional, it will be donated as well.

"It’s a pay it forward thing because the 2001 vehicle now will probably go to one of a number of the smaller food distribution agencies that can’t afford to buy vehicles," Brenner said. "We may be able to give it to someone else who needs it — 2001 is better than nothing.

"Gauthier has been very supportive of us and throughout the community, extremely so… they spread the goodness around which is lovely," Brenner added.